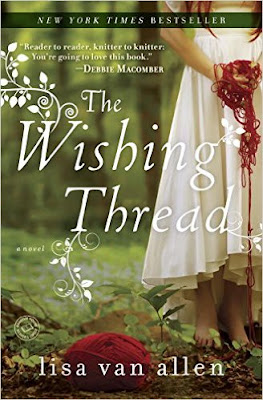 Every year at the turning of the summer season, I start looking around for 'October-y' reads. The perfect read has a bit of magic, maybe some ghost elements, maybe a hint of romance, maybe a touch of horror or mystery. The Wishing Thread gave me just the easy segue into fall that I needed. It's been a busy summer full of piecing quilt tops, canning garden produce, traveling for vacation, and garden puttering. I haven't read for the complete abandon the way I usually do. I've been reading for gaining knowledge and for fulfilling book group obligations. After a particularly demanding (and upsetting read (Ann Packer's The Children's Crusade) for which I won't even bother posting a reaction, I needed a truly light read - one that I could have a few laughs over, one that would make me remember that a good story can be told without gut-wrenching and depressing exposure of the human dark side. Thank-you, Lisa Van Allen.

After Packer's slow and meticulous de-construction of a family, it was a relief to settle into Van Allen's re-affirming story of what family really ought to be about ... losses that make people stronger, make them pull together, make them gently confront each other's foibles, mistakes, screwed up actions with love and forgiveness, make them move forward positively.  What can I say? I like happy endings.

Van Allen's sisters Van Ripper - Aubrey, Bitty, and Meggie have gathered at the Van Ripper homestead to mourn the loss of their Aunt Mariah. After losing their mother to a mysterious disappearance and presumed death years before, the girls were raised by Mariah. Losing her is a hard loss, as she was the relative that stepped in when they lost their mother. She is a matriarch with a strange magical power that has groomed them to live out the Van Ripper tradition of being the area's guardians of mysticism. These women cast spells ...

The loss of Mariah comes at a crucial time for the family and its neighbors. Their old, established neighborhood is in danger of being bulldozed by the city of Tarrytown, New York to make way for an urban renewal project that will gentrify the entire area of the city. Their personal lives are in tatters, but they pull together to make one valiant attempt to save their home and their long-established family's place within the fabric of the neighborhood ... and they do it ... after a fashion.

This is a fast read. Van Allen moves her story right along. Her sisters are a good combination of quirky, straight-laced, and kinky. They're different enough to make the family dynamics interesting, even if they do seem a bit contrived. I can get past that when the story moves as fast as this one does. There's a bit of romance, a bit of psychological angst, a bit of political wrangling, and a bit of humor.

Perfect beach read or curl-up-in-bed and forget the clock read.

I plan to pick Van Allen's next book, The Night Garden, when I get to the library.  I'm sure it will give me another good read. I still have a few other books to clear off the bedside table, though. Next up, Paula Hawkins's The Girl on the Train, Rachel Cusk's Outline, and Nele Neuhaus's The Ice Queen. Oh, and Erin Morgenstern's The Night Circus. I'll get back to you. 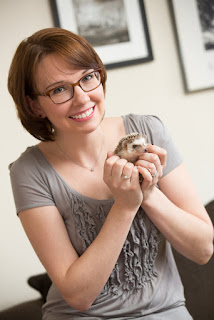 Posted by Susan Lindquist at 5:07 AM No comments: Links to this post