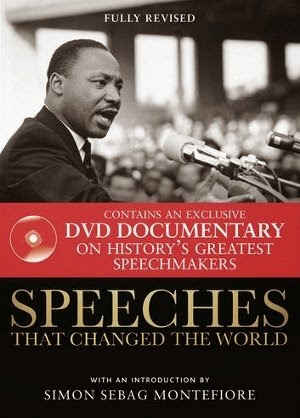 This is a book that one will take in small doses and around which one will do extra reading and video research. Initially, I came to this book to read Martin Luther King's 'I Have a Dream' speech, but found myself drawn to the speeches of Neville Chamberlain, Adolf Hitler, Winston Churchill, FDR, and finally, to Elie Wiesel. Strong words that swayed masses of people, left some shaking their heads, kept millions glued to their radio speakers, brought many to tears. The power of a strong message delivered masterfully is brought home to the reader, as each speech is read and then contemplated further through added research.

I highly recommend this book. It made me stop thinking about the drivel that one hears in the sound bites on nightly news and think about those moments in history when the right person spoke up to change the world, for good or bad. It helped me to put events in perspective and to take the moment of the speech as a jumping off point for further review of some of the most important moments in history.

It is a book that enourages us to 'never forget', to always honor the one who speaks up, to think deeply on man's foibles and his good and bad points, to always think about the message before blindly accepting the messenger, to question and evaluate the message of the speechmaker, and to remember one's own humanity and values - that small voice of conscience- while one listens to another louder and more strident voice.

Choosing the speeches for this latest edition of Speeches That Changed the World must have been an arduous task. My compliments go to Simon Sebag Montefiore and the editorial team at Quercus Publishing. One other thing I applaud is the inclusion of the DVD documentary included with this edition. It is an historical overview of 20th century political events that gives background to the speeches included in the book. It should be looked at only as an overview, though. There is so much on the Internet and in other books of history that can give real depth to the speeches and the men and women who spoke.

A good reference for anyone from middle school on up to use in researching world history and a great book to have on the shelf so that one can review famous speeches when they are referred to in conversation or in media.

Posted by Susan Lindquist at 8:27 AM 2 comments: Links to this post 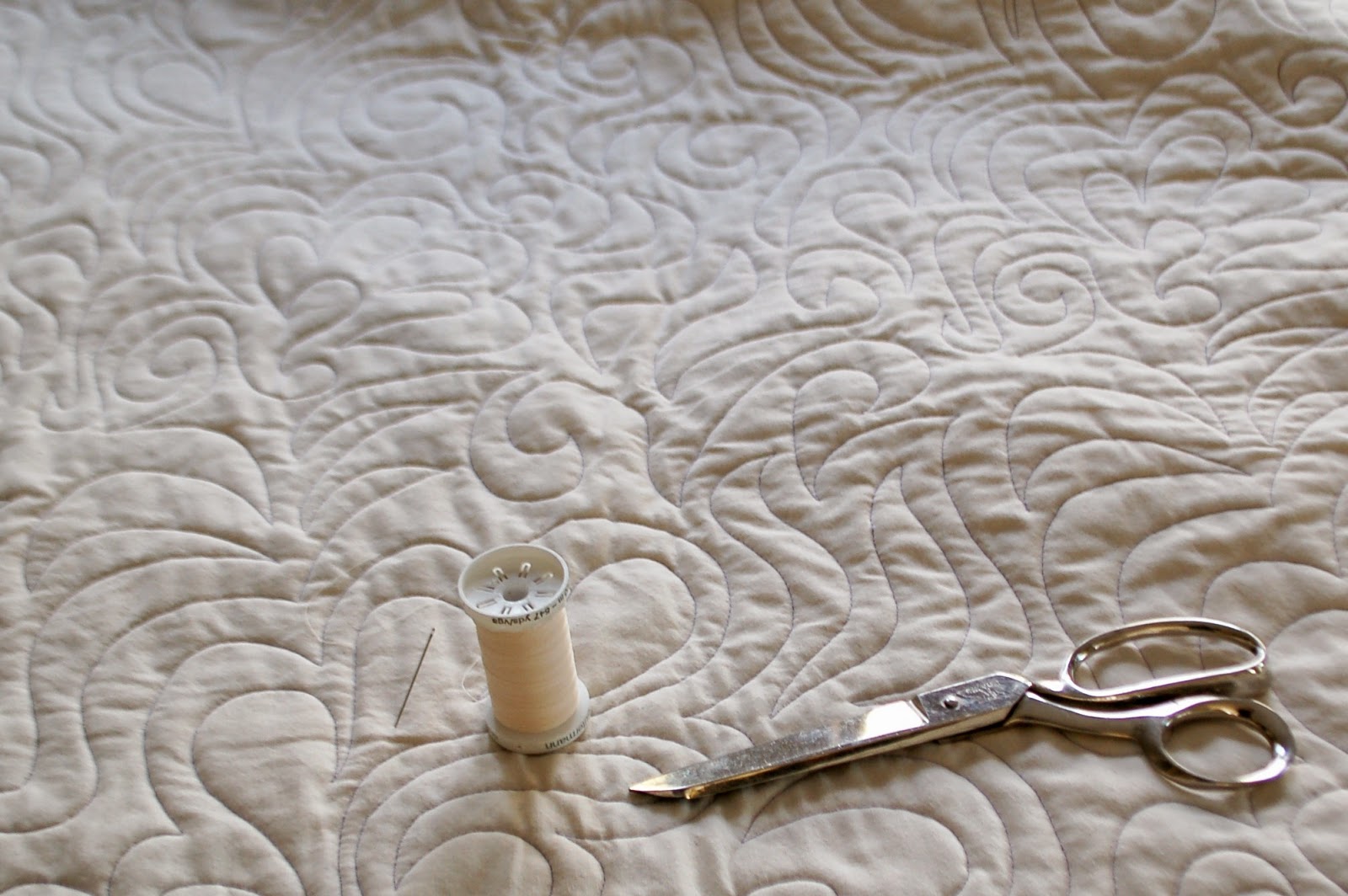 This little elf was a busy one in the days right before Christmas! By Christmas Eve, the final binding was being sewn onto the quilt that I gifted to my friend who lives next door. 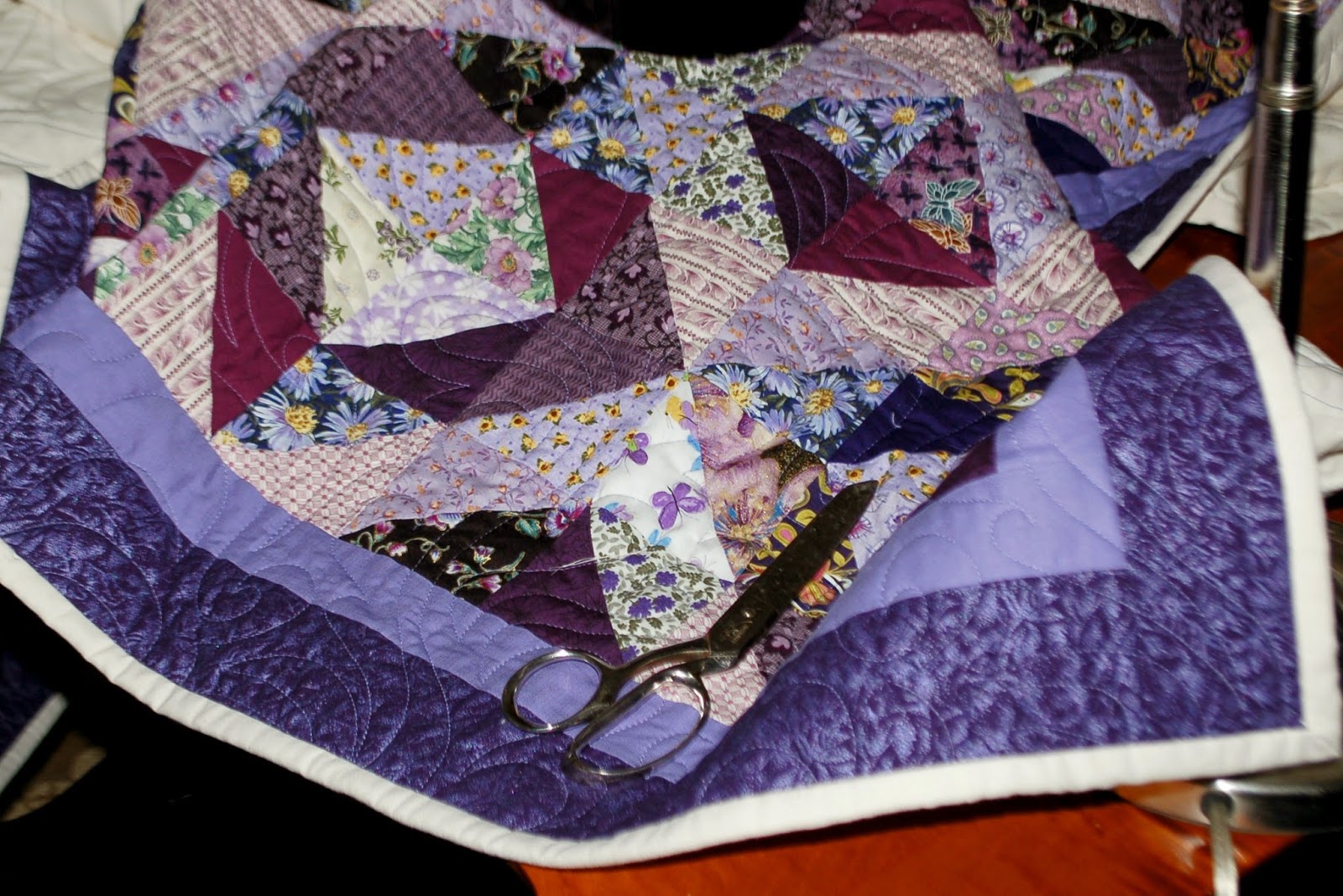 Jenna's favorite color is purple, so I used a pattern from the 'block of the month' challenge that is a routine in my little quilt guild to make her the most randomly purple quilt that I could. I think she liked it! 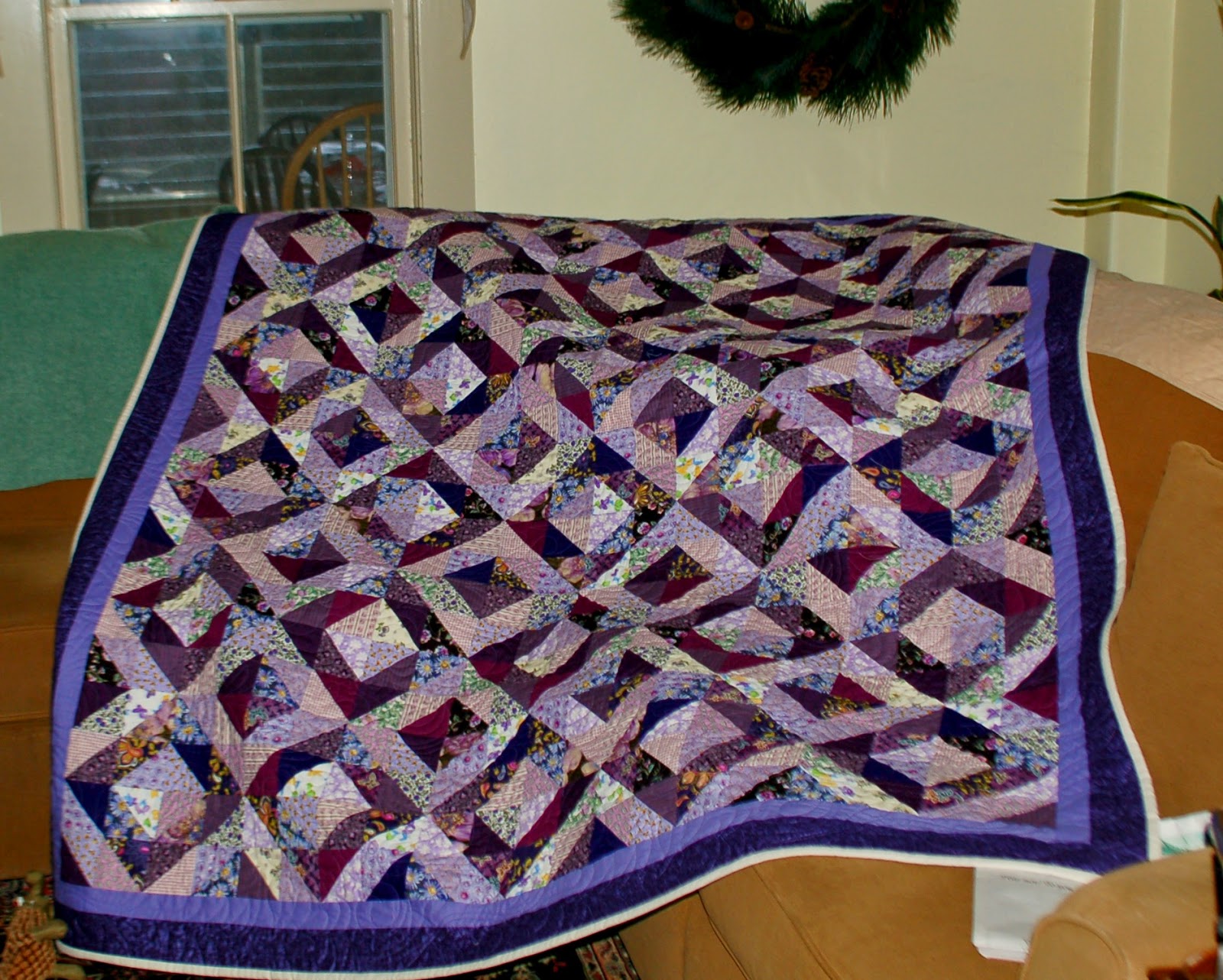 It will fit on her twin-sized bed and can be a wall hanging down the line or a couch coverlet. It really came out nicely. Merry Christmas, Jenna! Thanks for all your good company and all the love you give to the kitties and Corgis here in the grey cottage!


shared with other photographers at Melinda's photoshare
Saturday Snapshot 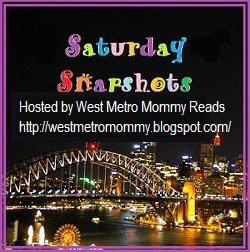 Posted by Susan Lindquist at 4:20 PM 6 comments: Links to this post 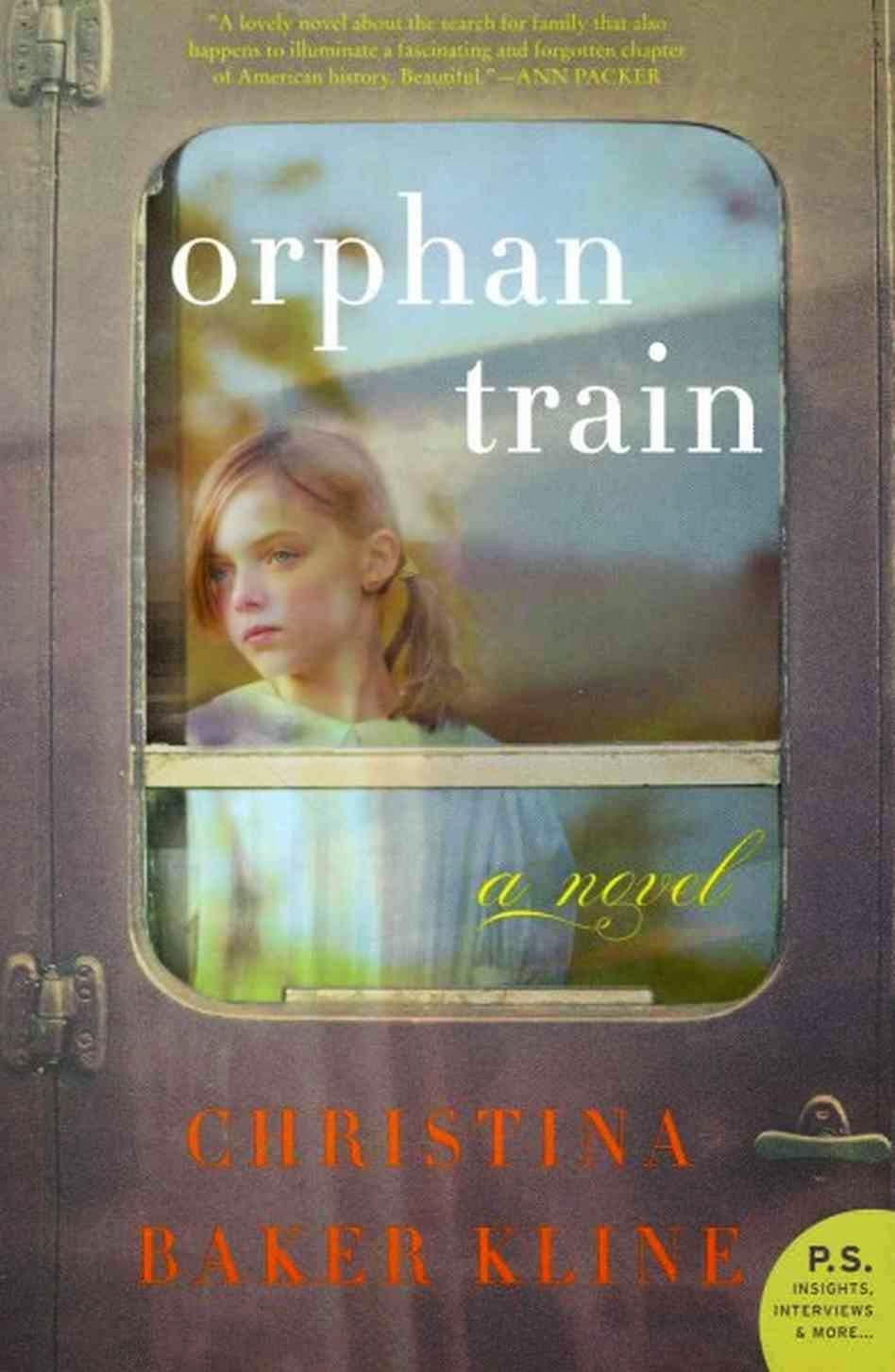 These days, I seem to be picking novels that have two parallel stories going that build to tell a more complete tale and explore common themes. Christina Baker Kline's novel is one more of that ilk. In it, her modern day protagonist, Molly completes a school oral history project in which she must ask an interviewee questions about their lives and change. What did you choose to take with you? What did you leave behind? What insights did you gain? Deep questions, all.

Molly is a teenager that will be aging out the foster care system at the end of her high school experience. She has been shuttled about from one foster family to the next over the years. She travels light. She guards her emotions and puts on a Goth facade that isolates her from those around her at school. She tries to never get too close to anyone, as she never knows when she'll be pulled from one family and school to be plunked down in another.

Vivian Daly is an elderly retiree, living in her vacation home in nearby Bar Harbor, Maine. Before retiring, she lead a life as a successful department store owner in Minnesota and has decided that her attic must be cleaned out, but can't manage the heavy work it takes to jockey boxes and cartons, filled with nearly a century of life's artifacts and detritus.

Molly, gets in trouble with the local library when she attempts to steal a book. In order to avoid legal hassles with the foster care system, she signs on to do community service hours and gets hooked up with Vivian Daly. She will volunteer to help Mrs. Daly clean out her attic and thus begins a wonderful friendship. Both characters are guarded about being too open with each other, but as time goes by and the community service hours mount up, Molly and Vivian find common bonds that will help each of them ponder the losses they've had in life, the important things and values that they have carried with them over time, and the need for true emotional connection with others.

I was talking with a friend about this book. She was saying that the local middle school teachers were looking at this book as a read for their students. We both thought it more appropriate for high school. The reading level is not difficult, but the content and topic seemed a bit advanced for young kids. This book deals with immigration and the prejudices that were common during the early 1900's towards immigrants, family losses, abuse, alcoholism, mental illness, rape, the orphan trains that ran from eastern urban centers to midwest towns that brokered 'homes' for young street children and orphans, modern day foster care and the problems with oversight, building emotional relationships and mending those that are 'broken' emotionally. Deep topics, all. I honestly thought discussion of the topics would be more fruitful with older kids. The issues of authority and system failure when abuse and rape are involved would be valuable discussions for teens to explore these days, given what we're seeing in the press.  The issues of immigration and how we deal with the poor and needy could also be valuable discussions with older kids, but could be too 'gritty' for middle school aged kids (IMHO). The historical topic of the orphan trains is pretty complex too and worthy of further research to find out the true stories of thousands of children who were shuttled out of the cities in a Progressive Era social experiment that, while well-meaning, was poorly monitored in many cases. So ... this novel has a lot of 'meat' for a simple story.

The themes don't bog down the story, but they're there. Kline moves her novel along really well, jumping between modern day Maine and Depression-era Minnesota. The reader learns of the tough start to Vivian Daly's life as she is shifted from one foster family to the next during her early teen years. Molly, in finding out certain details of Vivian's life sees the perfect interviewee for her history project and in the process must confront those questions in her own life. All ends well in this book, but one is left to wonder about those thousands of kids and their real life stories ...

A fast and thought-provoking read ... 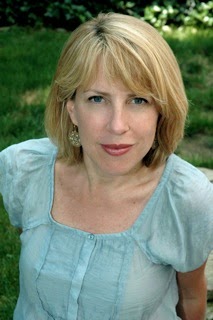 Posted by Susan Lindquist at 8:06 AM 2 comments: Links to this post 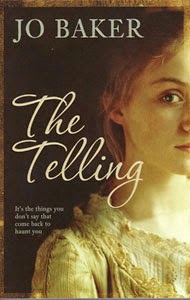 I love  it when I find a new author, of whom I know nothing. I love it even more when that author has a body of work that I can jump right into. Jo Baker's work was unkown to me until I came upon her novel called Longbourn. Placing the story at the Pemberly estate and wrapping the characters of Jane Austen's Pride and Prejudice into a different spin was the perfect tease for me. I do love my Jane Austen, you see. But wait! This Jo Baker has written other things!

Read more »
Posted by Susan Lindquist at 6:52 AM No comments: Links to this post