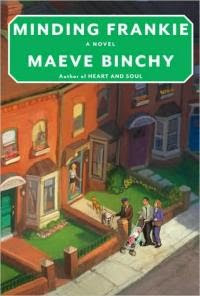 I've always heard that the Irish are great storytellers and Maeve Binchy has proven the stereotype. I've also heard that the Irish are full of blarney ... and again, Ms. Binchy proves the cliche.  I picked up a copy of her 2011 offering at the library last week, needing a light read after having read a dark mystery. Minding Frankie seemed just the ticket - a light-hearted story about a young man with little life direction and a huge addiction to alcohol is redeemed by the revelation that he has fathered a child. The child's mother is on her deathbed and pleads with him to care for the little girl after her death. Miraculous changes are brought about by a tight-knit neighborhood of folks who pull the small struggling pair through the first year of the child's life and the first year of the young man's struggle to ditch the booze and prove his meddlesome social worker wrong. Meanwhile, the neighbors all have their dramas and crises ... sounds like a really cast of characters, yes?


Yes! That is where the blarney in Maeve Binchy shines. She writes a fast stream of a story that is in no way plausible in real life, and yet, we read along. She juggles a cast of characters that is huge, bringing their own smaller stories to a larger theme. In Minding Frankie, the story of a small community making a big difference in the lives of its weakest members and working to better itself forms the happy message. Along the way, Binchy touches on the nature of marital relationships, parenting styles and their ramifications on children, the nature of the modern family unit and society's changed attitudes toward it, and government intervention and its 'black and white' policies that require a bit if  'black, white, and grey' interpretation.

The plot of this book rolls along. Ms. Binchy tells a detailed story, but she never lets it bog down with such complexities as real character development or too much detail in the characters' back stories. Instead, she writes short vignette-type entries that move the reader up and down the block of St Jarlath's Crescent, a small neighborhood in Dublin and the setting of the novel. She introduces and glosses over the main events in the lives of each family and weaves them into her larger story of Noel, the young protagonist who changes his life when he joins AA and takes charge of his newborn daughter, Frankie. The reader follows all the neighbors and this struggling family, as they cover all the bases and learn all the details of child-rearing that a zealous social worker demands.  And it all works. All the strings are wrapped up and tied in a bow by the end of the book. Miraculously, Maeve Binchy brings all the characters through their own dramas - gets Noel off the booze and into a promising relationship that's headed for the altar, little Frankie firmly ensconsed in this nicely formed family, the maiden cousin married and moved into the neighborhood, the widowed neighbor through the worst of her grief and back into the life stream of the small community, the young professional couple moved to their own home and out of the in-law's place, the young talented designer out of her nowhere relationship with the Lothario chef and into a new position in London, ... phew! I could go on, but you get the picture, right?

Maeve Binchy's books are hugely popular. They're rollicking stories that lead the reader through the book by a tether and leave them having been told a whopper of a story. Yup ... a bunch of blarney, but a good beach read! They will never win literary prizes, but they are a good bit of fluff when a reader needs it. She tells a happy story, that Maeve. 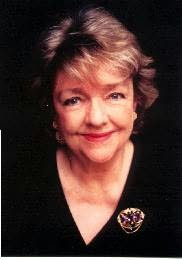 Posted by Susan Lindquist at 5:57 AM