Summertime Creep Out ... Under The Dome Read Along! 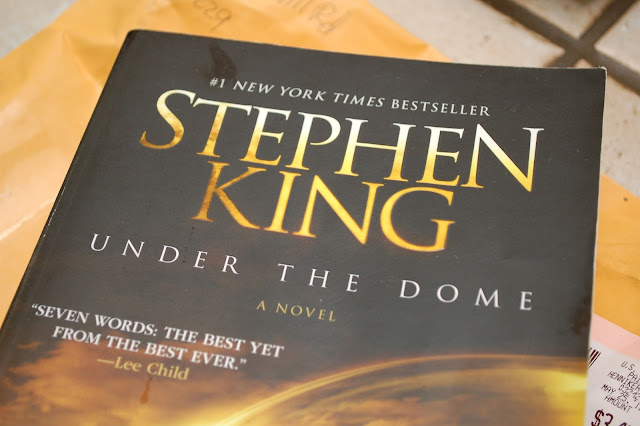 It takes a group of readers to bring me back to Stephen King. I haven't picked up any of his fiction since The Stand because that particular novel scared the living bejesus out of me so much that I had to put it down. King has such a way of creating really sinister and creepy characters that get under my skin and make me jittery ... and I don't like jittery. Heck, I don't even like the jittery that three cups of coffee can bring on!

Natalie, blogger over at Coffee and a Book Chick must like coffee jitters AND Stephen King jitters, as she is hostessing a summertime reading of his novel, Under The Dome. This is just in time for us to get the story straight before the television mini-series adaptation hits the tube in June. Well, I'm trying to expand my genres, so I thought I would give thriller/horror genre another try and why not go all out with the king of the genre?

Stephen King and I have funny past. One of my first experiences reading King was with Salem's Lot. The summer that I was nineteen, my family vacationed on Cape Cod for two weeks. Salem's Lot was my beach read. My younger brother, jokester extraordinaire, knew that I was creeping out on the vampire thing and came to the outside of the screen window of my bedroom one night while I was curled up reading . He scratched on the screen and stood there with a blank zombie look while I had a heart attack and screamfest. The creep ... I have never lived it down. Yeah, Stephen King has definitely made an impression ...

When I came down with a severe cold and respiratory infection while reading The Stand, it became too much. I put that book down and never looked back. So coming back to Uncle Stevie is a huge thing for me. I read his memoir On Writing earlier this year, just because I am so curious to see what goes on in that mind of his. Now, I think I might be ready to come back into his creepy fold for a while.

I can't promise I'll make it through this tome, but I'm giving it the old college try! So ... off I go to dive under the dome with the rest of the readers .... I have a funny feeling that things are going to get real weird, real fast!

Let's Go Under The Dome!
Posted by Susan Lindquist at 12:21 PM

Email ThisBlogThis!Share to TwitterShare to FacebookShare to Pinterest
Labels: 100 Books in 2013 Challenge, Under The Dome Read-Along