The Fortress of Solitude - Jonathan Lethem 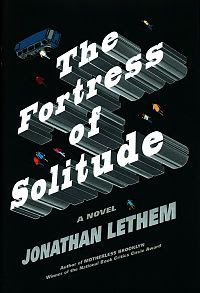 Jonathan Lethem's book about young Dylan Ebdus and his life-long friendship with Mingus Rude made be cringe, shudder, shake my head in wonder, and finally, sigh in resignation. The book is touted to be a 'fictionalized autobiography' of Lethem's years growing up in Brooklyn during the first throes of 'gentrification'. It is a relentless slog through a childhood lived from the apartment door through the gauntlet of the streets to  'P.S. # Whatever' by a nerdy little white boy with a half-cocked mother and a nerdy little white boy artist of a father ... poor kid. He gets a world class introduction to the art and music of the era, but lacks any real family connections that extend beyond the apartment walls. To boot, his mother abandons the family while Dylan is still a young kid, leaving his detached father to raise him ... or let him survive among the other detached souls in Gowanus. Dylan builds his fortress of solitude year after year, developing a keen mind and an alleycat's instinct for survival. He becomes a social chameleon.

Consequently, young Dylan observes the goings-on in his neighborhood - the young kids making their way on the sidewalks and in the alleys, playing ball, learning the fine art of tagging, forming alliances that will translate into neighborhood gangs when they are older, dodging the drunks and the druggies, and surviving until they can escape the neighborhood or carve their own turf within its boundaries. Dylan meets Mingus and together, they form an alliance of sorts based on comic book heroes, music, and the basic prurient interests of young boys. Their teen years become a laboratory of artistic experimentation in the development of their 'tag identities', sexual and drug experimentation, and slowly negotiating their future tracks.

I know this is a 'smart book'. It's well-written. It's edgy with its constant referral to the art and music and atmosphere of NYC and its environs during the emergence of soul, disco, punk, and the alternative art scene. It is heavy with local color, the various political initiatives of New York politicos, and name-dropping, the story moves along and my heart aches for Dylan and Mingus and their crony, Arthur. It's everything that a young urban writer might want to put down on paper, but it left me sad and lonely and bereft and thinking of that old spiritual called 'Sometimes I Feel Like a Motherless Child' ... perhaps that was Lethem's point?

Guess I'll go back to a light read after this one ... 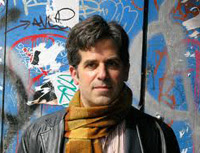 Posted by Susan Lindquist at 6:57 AM